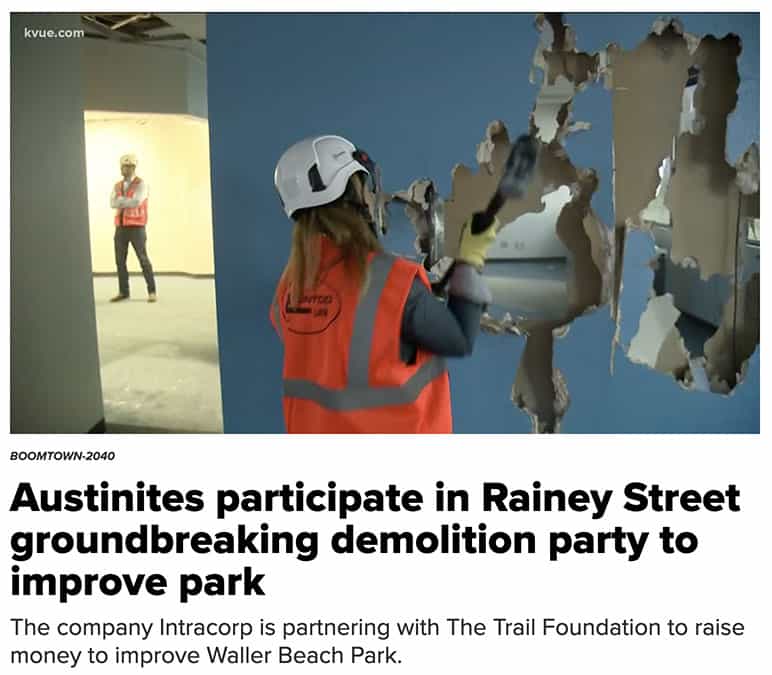 AUSTIN, Texas — A new 49-story high rise is going up in the Rainey Street District, and the company behind the project invited the public out to its groundbreaking ceremony on Tuesday.

Brad Stein, the managing director and senior vice president with Intracorp, said they would hold a fundraiser where participants can help tear down the existing structure on the property. Proceeds will go towards improving Waller Beach Park.

“Why that is important is because the connection of community and development go hand in hand. So we are going to be bringing a lot of residents to this neighborhood, and I think it is important that we set that example,” Stein said.

Each demolition method was determined by how much a participant donates:

The company will match up to $50,000 of donations raised, Stein said.

Anyone interested in participating could reserve a spot early by donating and joining The Trail Foundation. Or people could show up at 4 p.m. and representatives would assist them with donations on site.

Upon completion in 2022, the high rise will consist of 310 one- to four-bedroom homes. Stein said this will continue to contribute to the growth in Austin and make it easier for residents to commute downtown.

“We think it’s really important. People want to be downtown. The more people that live downtown, hopefully, that helps with some of the mobility issues we are having,” he said.